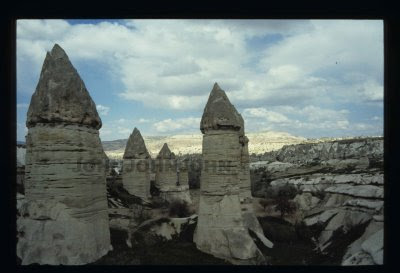 Photocredit - John Millson
These are rather special! hoodoos in Pamukale, Turkey... which we visited donkey's years ago... Donkeys do live long and happy lives don't they?
They are predominantly grey (the hoodoos and the donkeys) unlike the well-known ones of the Americas (Grand Canyon, Yellowstone Park etc) which are red in cross-bedded sandstones. They form as the rock layers erode at different rates.  Often they are mushroom-shaped because of a harder, cap rock which is more resistant to weathering.
In Alberta, maybe all over Canada, I am afraid I don't know, these rock formations standing like sea stacks on land and are called Hoodoos.

They usually go around in groups! as can be seen in the uppermost image. 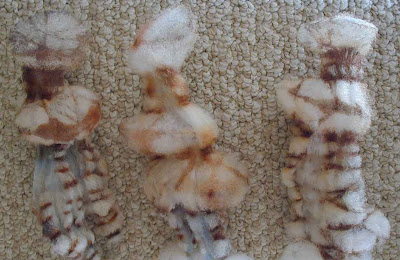 Working with Shibori and patchwork wadding or batting as it is called here... I have found a way to create 3D hoodoos.. and now I am going to add detail to the rock layers.
More on Hoodoos
at 9:19 AM

This is so exciting! I like the Turkish ones, but they are so different from the North AMerican style:}

I just said to Al. that it feels so good to have something that I feel is working so naturally. Michael Brennan Wood's (a hero of mine) words are coming back to me... he had a thing about not struggling to make something work. It is always best if it just fits together. Tomorrow I'll post something with **stitching** and it feels like a long time since I did that?!?