Indigo at the Quilt Festival - A two centre story. 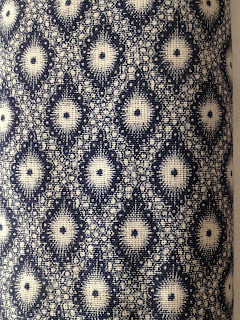 This may not be news to you, but ignorant little me knew nothing about American Quilts in Indigo. or the connection with my home town in Manchester England -in those dark days of Indigo, cotton and slavery.

I jotted down a few notes about one show area at the Quilt Festival that was absolutely plastered with no photography signage.  That is sad.  But True.  You could buy a book instead.  Funds didn't allow it.
I hadn't heard of this collection before  - The Poo Collection (yes really.... I will have to look into why it is called that).
I had a great chat with Kay Triplett who co-owns, with her sister, a collection of wonderful American 19 century Indigo quilts (amongst others).  I looked at the fabric and didn't understand - where did these fabrics come from.  She told me that the Indigo fabric was produced in America.  It was mostly created using resist methods and roller printing of the resist.  That is why the pattern is so perfect. (I like mine less so).
It was very interesting to learn that Indigo was grown here in the US (probably along with the cotton, I surmised) on the plantations.
Noting my keen interest and enquiring mind (ahem), Kim took me to see the only red white and blue quilt on show.  (I had asked her about the relationship if any with the Arts and Craft Movement (and W. Morris in particular).  She explained the red and blue quilts had some fabrics that had indeed been discharge printed, others used the American Resist method. She showed me some fuzzy edged patterning and the red (probably madder) dye.  I was in heaven.

This story developed for me, as later in the day I discovered a vendor Cotton in the Cabin Quilts who was selling indigo fabrics.  And wouldn't you know it they had some of the very same indigo dyed (resist printed) fabric. My purchases are shown above and below 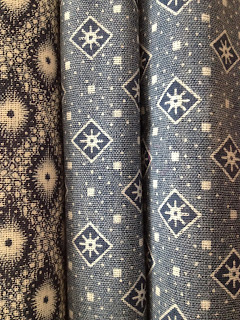 I chose two small pieces (we are still on cost cutting here in our Shell family) and asked the store owner if they could tell me anything about the fabric.
"Well I certainly can." said Mr. Loring McCay.

Indigo (from the 1600s) and cotton (of course) was grown in, most notably, South Carolina (Eliza Lucas Pinckney is credited with making indigo the largest export crop in South Carolina during the mid-1700s.) and West Virginia from about 200 years ago till the civil war, after asking her father to get her some indigo seeds and a slave! (The war had a knock on effect and the Cotton Famine affected many families in Lancashire at that time.)
However The fabrics were woven and dyed there in central America.  It is a truly shameful tale.  Here are some references I found online during my research.Credits for the quotations below go to  - - http://www.utexas.edu/cola/hemispheres/_files/pdf/eti/Indigo.pdf
"...when prices were high, indigo dyestuff could be exchanged for slaves; it is said that a planter in South Carolina could fill his bags with indigo and ride to Charleston to buy a slave with the contents, “exchanging indigo pound for pound of negro weighed naked."

"Not a chest of indigo reached England without being stained with human blood … I have seen several Indian peasants sent unto me as a magistrate, who have been speared through the body. I have had Indian peasants before me who have been shot down by the planters. I have put on record how others have been first speared and then kidnapped; and such a system of carrying on indigo, I consider a system of bloodshed."

I will never look at indigo in the same light again.
However, another story emerged as Mr McCay spoke to me; one with a more personal connection.

The fabric I had purchased was the modern but identical version of these American fabrics.
Here is the story.
The indigo story in Manchester begins in the 1930s with  the emigration of Gustav Deutch to Lancashire.  He was a fabric printer/discharge printer working in Czechoslovakia and Hungary.
His mills were later purchased by Blue Printers Ltd, Wigan.

A mill in Manchester (I am from Manchester, did I say?)  wove cotton (probably sourced in America and ?India).  They dyed the cotton using Indigo (probably also brought from America or more probably India by The East India Company.  Of course it was then exported worldwide as well as being sold locally.
One of the places it was sold was to South Africa, the most popular brand was Three Cats made by Spruce Manufacturing (possibly in Wigan). 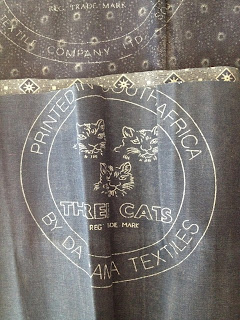 I wonder how many years this had been a lucrative though bloody business, through the times of William Morris for sure... but things changed in the '70s, possibly because of health and safety aspects to do with the natural dye industry, or the prevalence of synthetic dyeing.... who knows (do write and tell me).

Two of the principal staples which India produces for exportation are opium and indigo. In one respect,and in one respect only, opium  and indigo resemble each other. They are both cultivated by a system of advances, which presents some features absolutely identical.
In all other respects these vegetable products can only be compared to be contrasted. Opium is a drug which is grown for traffic with China, and is that “foreign medicine” which now passes through the Chinese custom houses at a settled duty; indigo is a harmless dye, which is very welcome at Manchester, and exercises only beneficial effects upon our relations with the rest of the world.
An excerpt from “Brahmins and Pariahs: An Appeal by the Indigo Manufacturers of Bengal to the British Government, Parliament, and People,” 1861

In 1970 the factory in Manchester closed **and the machinery was moved to Da Gama in East London, South Africa.  Da Gama now own all the original copper print rolls from this period of Lancashire dyeing.
In fact my own research has shown me that Tootal invested in the South African mills and began to produce Three Leopards Brand.  For more information on this industry in South Africa go here. 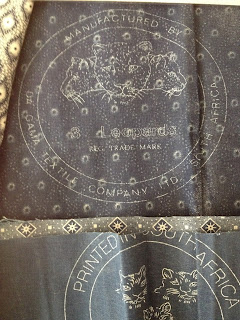 Three Leopard Brand on the reverse of my fabric
On closure of the Lancashire factory, the remaining bolts of fabric in Manchester were thrown on the dump and a friend of Mr and Mrs McCay went and collected them - there were 1000s of yards of red, blue and cadet fabrics.

Production continues in S Africa - where the stiffness of the fabric denoted its quality.  My samples are actually rather stiff.  However, it is the odour that they carry that means more to me.  It is a scent that I remember from my youth when I used to go to the cotton mill in Manchester with my mother, Renate Kesler, who was a bookkeeper at Chain Bar Mill - who were cotton weavers, not dyers I believe. It took me back 40 years!
I hope you found this as amazing I did.

** During research for this blog entry I noted that a fabric is for sale today at
https://www.fabric.com/buy/0364988/premier-prints-manchester-laken-indigo
I am now wondering..... is there more to be discovered?  Research continues.