Just back from a week's felting with Marjolein in BC, but so much to do, I miss having the wool on my hands, but a little admin. this morning for SDA

Just back from a week's felting with Marjolein in BC, but so much to do, I miss having the wool on my hands, but a little admin. this morning for SDA.
Here is a publicity shot. No fancy evite... yet... Just the raw data and lovely photo.

“Spend an evening embroidering with visiting Vancouver artist Lois Klassen! Participate in her new project that celebrates the slow pace of traditional handwork and uses it as a metaphor for the progress of the equality of the sexes.”

For more information go to : http://www.surfacedesignalberta.blogspot.ca/2013/09/next-sda-alberta-meeting-collaborative.html 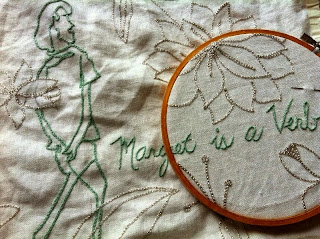 Lois Klassen, Margaret is a verb: A Tribute to Margaret Dragu (from a blind contour drawing by C. Mochizuki), 2013

On Thursday October 17, spend an evening with visiting Vancouver artist Lois Klassen. Participate in her new project that celebrates the slow pace of traditional handwork and uses it as a metaphor for the slow progress of feminism.
"Slofemists" (2013) on the inception and under guidance of artists Lois Klassen and Lori Weidenhammer, is a project that enables unhurried production of feminism. Starting with found linen fragments, the project invites participants to materialize through needlework particular feminist voices and feminist moments from  their own experience. A library of supply packets that include material and relevant textual and media resources will be part of sewing events or accessed through a lending system.
This project has just started. By October 17 it will include a small collection of embroidery patterns derived from feminist inspirations, by the hosting artists.  Those patterns will be available on paper and printed onto a few 16 x 16" linen squares. The artists have amassed some "found linen" swatches from a high quality drapery supplier. Many of them already feature machine embroidery and elaborate surface prints. The hand embroidery is like/will be another layer of intervention, making them mixed media collage. Participants can make their own patterns, recommend topics and resources for the kits, or work on the squares that have already started. The materials in the kits can be looked at and discussed during the sewing event or they can be borrowed and taken home by the participants. Lois will have mailing packets for participants to send them back by project end. (Date to be announced.) Over 100 squares will eventually become an ornate patchwork cloth that will serve as a couch cover to form a mobile artwork: "Slofa". "Slofa" is expected to be a prop to enable and engage with the public in discussions and performances about the slow pace of feminism, and the tireless work required to materialize it in one's everyday life.
Lois Klassen is an artist and writer based in Vancouver. She is particularly interested in participatory art in the city, and the social life of crafts. Her on-going social sewing project is documented at comforterartaction.org.

Lori Weidenhammer is a performance-based eco-feminist artist and educator. She prefers to make art in “galleries without walls”, i.e. gardens. She is part of the Second Site Collective and a founding member of the Slofemists. She blogs at www.beespeakersaijiki.blogspot.ca.
Klassen and Weidenhammer are past collaborators on Means of Production Artists Raw Resource Collective (with Sharon Kallis, 2009) and CornerFarm: Repurposed Planters for Avant Gardeners (2008). Lori and Lois have collaborated on a number of projects concerning ecology and sustainable lifestyles.
Embroiderers are invited to bring a hoop, needles and any extra floss they are happy to share. Lois will have more supplies, including drawing paper for patterns, the linen and some patterns. The meeting/gathering will also be a time to talk together and share ideas about crafts and feminism.