The Calgary Public Library has a series of books circulating right now that encourage public involvement and creativity.
These are books for people to create by being creative via literature or art. But not the two together!
So I put a 'hold' in for the arty one with the title "Diversity" sounded right up my street.
I had thought I would get a book that was already half full of artworks, cartoons and sketches.  In fact I got a book that had this skillful and beautiful rendition of the Ash in Calgary, and nothing more.  In other words I was expected to be the second 'artist' to add something.  The pressure was enormous. 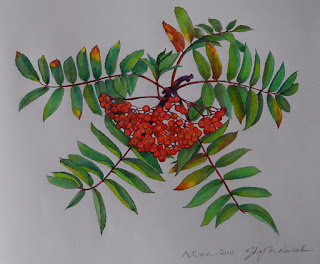 I held onto the book for a week or so and considered simply returning it to the library... after all, I don't do art like that and it had made me feel rather insecure I suppose.
But then I thought... it is only people like me participating that will make this thing a diverse work in itself.  So I have added my bit... consider it a doodle or playful work... both of which are acceptable additions to the "Travelling Art Book" it says this (I paraphrase) in the directives on the first page.
My piece illustrates the diversity of coral reef to deep sea... and I had fun. And if it encourages people to simply relax and have fun and put something on the pages... all well and good. 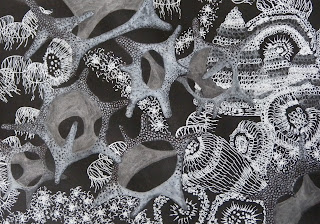 To get hold of one of these books yourself go to Calgary public library.
at 5:27 PM

What a fantastic idea to have a book like that circulating through the library. Good for you for taking up the challenge! I love your "doodle".

ooooh! very cool. Thanks for linking up! Very nice to meet you there. : )
~Monika in Saskatoon

Interesting project, great that you joined in.

Such a neat idea. Bravo!

I love your addition, and it's quite an interesting idea to have a book like that at the library,

That is such a cool idea. Your addition is marvelous! I wonder if Ottawa has something similar - I'll have to go check it out. Thanks for sharing!

I really like what you added. I have a feeling that many weren't prepared to follow the first painting, but that's kind of sad. Kudos to you for jumping in and being willing to add your piece.

Thanks everyone... this post seems to have generated quite a lot of interest. Perhaps you could start your own travelling book if you don't have access to one i the library. Just pass a sketchbook on to a like-minded friend (ask him/her to keep it for 3 weeks or less just like a library loan) and see what happens.

Thanks, Karin. I work at the Library and was part of the team that brought this new travelling book initiative to the Calgary Public Library. I am thrilled to read the high level of interest it has generated! We see it as a kind of city-wide dialogue of a different sort. The 5 topics of the books are Diversity, My Library, Community, The Future and Arts & Culture. Thanks, too, for your addition to the sketchbook - it is very beautiful. and, you are right that it doesn't matter what "level" of artistry the submissions are. We just want to see and read what Calgarians want to share. Hope you can add to the other books as well.

So nice to hear from everyone. Please, Anonymous. Can you contact me via email. ioftheneedle@me.com I have something creative to talk to you about.