Non-stitching the hoodoos with thread 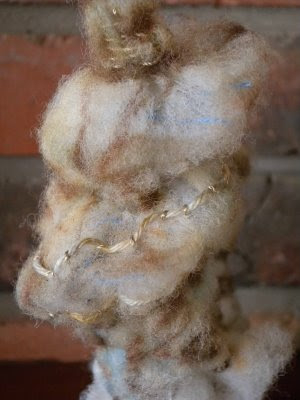 I added stitching to give an impression of joints and bedding planes on the hoodoos' surface . I realised why I didn't like the result. My shibori pieces take on delicate forms with the play of light and shadows being very important as well as the composition of shapes and the interplay of the coloured lines which are echoes of the line of the thread used in the negative tied die method. Added stitchery can so easily detract from the beautiful shibori forms.
So I thought I would just do minimal stitching... very 'in' at the moment. 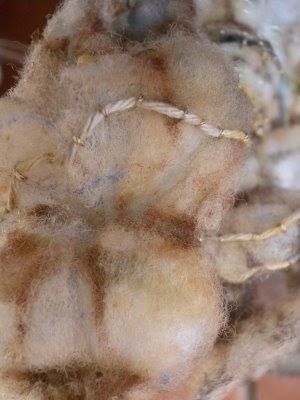 Then I remembered the effect you can get by having threads within a 3D surface... 'Non -stitching' was invented at that very moment. Non-stitched lines are blue in the two samples shown above. Maybe I will go with this.
The non-stitching creates the very muted lines within the hoodoo. Sometimes the colour reaches the surfaces just like the lines of veined rock surfaces.

By the way these are the first images taken using my new camera... I was very lucky that my older camera packed up within its warrantee period. Of course they didn't have another camera of the same ilk to replace my camera... (all this done across the 1000s of miles owing to the fact that the Omani warrantee doesn't extend to Canada) so we paid up another $100 and they sent me (successfully via DHL) a new one, and it is an upgrade. I think the macro will do, don't you?
at 12:51 PM

YES!!! You've got it perfect with the unstitching!!!!!