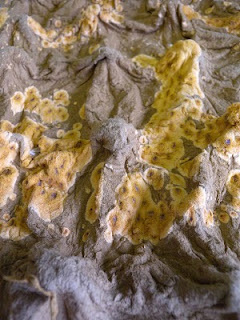 How do I feel about ACAD residency now?
I am proud to say that after three weeks of the ACAD home studio security I can now open the lock with one-handed.  This might seem like a small development, but believe me it isn't and will probably keep me coming back for more next year.

What have I accomplished apart from this?
I now have many (hand-made) sheets of brown paper! :-  brown papers that are iron stained and brown papers that are iron stained and are beginning to be sculpted.  Hmm... is that a lot to show for 3 weeks work?
You might not think so but I know how labour intensive it is to hand-make paper without a Hollander and pulper.  I only burnt out one blender (and even that wasn't entirely my doing, as it has probably been used for many student-hours before I got a hold of it).
Iron staining takes about an hour to set up at least two days to process and although I was, initially very excited about having access to all the rusted metal in the studio, I now find that there isn't enough to do a huge batch of rusting.  Next week I will try to track some more down at ACAD and I have plans to request use of some that I drive past on the industrial estate (called Manchester!) near where I live.  This is a piece inspired by palm tree bark. 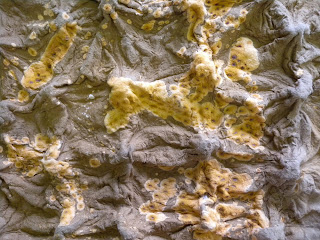 I need to  challenge myself over the stitching(where it is necessary) otherwise I will end up with surfaces that look like other surfaces I have created in the past. 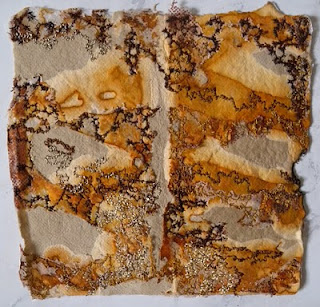 Above is an image of one that is not sculpted and was really just an experiment for edges... () and to see if my sewing machine can cope with iron filings and paper pulp that drop down the hole as I sew.  Conclusions: yes I can burn the edges! - but I will finish that off at home, the thought of having the whole of ACAD evacuated because of my paper burnings was too much for me.... and as to the sewing machine... only time will tell.... 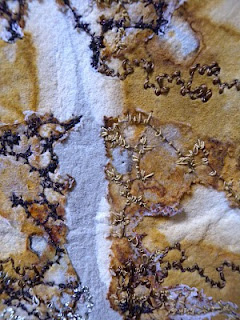 So what of my final week at ACAD next week?  I plan to do as much iron staining as materials will allow and stitch, stitch, stitch. If possible also place some pieces to shibori (I think I can use that as a verb!)
I hope I make time to sort out some pieces for the show in August... I have to do it now as I have other commitments between now and then, I must get organised for August and it isn't even July!
August 21st - Sept ???7th.  At the Marion Nicoll Gallery in ACAD.  Be there.
at 4:05 PM

The rust pieces are awesome!! I love the stitching, am always interested how people decide to stitch the rusted patterns.I love traditional rusting on fabrics and must say my Pfaff hates rust but the really old Bernina loves it - if you remember she also loves cans!! Good luck with the exhibition.