My last week at ACAD 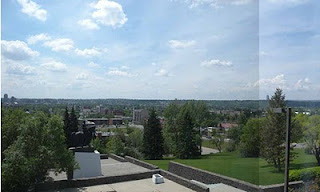 Even though I have a view out of the studio window that is shown above for your pleasure. today I was despondent.  I wrote up my 'diary' and as I did so I worked things out.  The difficulty with being alone at ACAD in the mornings as compared to working at home on my own (which I am quite used to) is that in my home studio I don't expect to be with anyone else.  Whereas the college is supposed to be buzzing with people.  Yes, it is quite a lonely existence there on your own.. rattling around the studios.
When someone does arrive I find myself babbling on and harassing the poor unsuspecting... with my lonesome chatter.  It isn't quite as bad as I make it sound... I am not begging for attention... but it might seem that way. 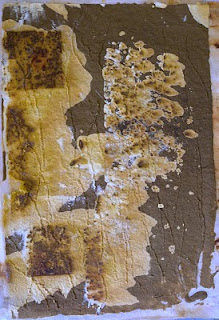 Anyway just as I was feeling all down in the dumps today they started to arrive and by the end of the day we had a busy studio with Jen., Lindsay, Ashley, Charis and Me.... wow... that is 5 people all there at once, a record. 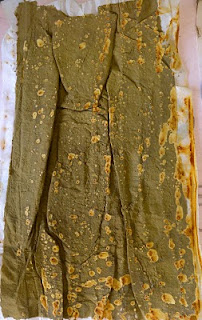 To cheer myself up I collated what I have produced whilst at ACAD so far and it amounts to 36 pieces.  Some are just sheets of handmade paper, others are interesting coloured surfaces but the exciting ones are the ones I have worked into both with thread and sculpture and I feel that this is where I aim to go with the sheets that I haven't done anything with yet.
The piece above is dyed, sculpted whilst iron-staining occurred on a metal bucket! and pressure jetted.  Now I have added more jet stream and am waiting for it to dry. 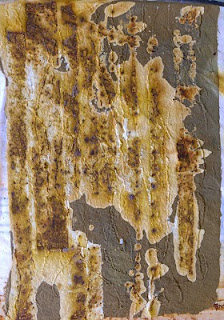 It was very nice that I had some feedback on the pieces I had put up on the wall last week.  Melinda gave good feedback directly to me on Friday.  Rosanne had been in at the weekend (yes, that is correct English my Canadian friends.... At the weekend... not On the weekend...., but, On Wednesday (and not just Wednesday, In March.... etc etc...), and then today Charis offered some insights and so did Josi.  Now I am well-informed as to which ways I might take the pieces.  Thanks everyone.  Invaluable. 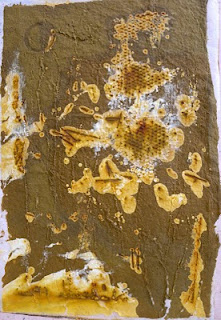 Now I am home, after shopping - Safeway very close to ACAD luckily... made Tacos for tea, Dan cooked up the chicken good man! and I did refried beans, with plenty of raw veg... better known as salad,  and now I am off to yoga.  Should be a great brain break.
Oh, but tomorrow is Mugs Morning for Al's class's mums.  So a bit of a commitment break there for me. Made 2x choc fudge brownies, no nuts and Gluten free for the group tomorrow as well this evening...so it turned out to be not such a bad day.  Or rather, I feel better with myself now compared to 11am this morning.  Despondency Disappeared.
at 6:11 PM