It seems to me that the residency is just getting going.  I suppose some of the students wanted a bit of time to themselves without pressures - after term finished.  So this week I have seen more faces in college than previously.  It is a shame that I cannot continue through July and August.

This week has been a bit interrupted for me + I am feeling the effects of end of residency, as it dawn that I have only a few hours left to be there.  So this week i managed to get in on Monday, briefly on Wednesday, Thurs and today.  I will pack up on Monday. 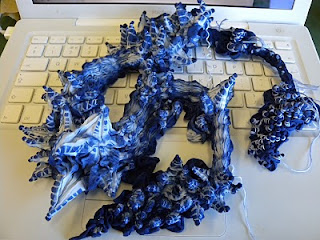 Whilst at home and at ACAD I have continued with the worms.  This is a sample which I have finished unwrapping now and worn as a scarf (of course) it is not indigo but acid dye and is a great prototype for the next worm I will make.
I hope to exhibit a few worms, what is the collective noun for worms..?  at the ACAD show.

I have used the time to get some colour onto my papers and give some thought to if/how I might participate in the end of residency show.  I flow from yes to no and back again. 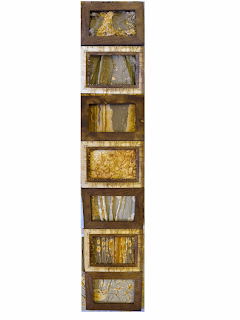 I know this image is incredibly difficult to see but it jut gives an idea of how I might display some of my tree bark papers.  I have many - but they are not finished and this just shows my thought processes.
at 7:25 AM

Love the worm! bet it looks great worn as well! You must have a lot of patience to do all that wrapping and tieing

Thanks Anna, I just enjoy shibori... I think it is the real me. I love the wrapping - stitching is a bit tedious by comparison....But I am, as usual, breaking all the "National Treasure" rules with my work... I hope I don't offend anyone.

love the "bark" pieces--what about using rustic found frames, or conversely, something sleek and modern?
They remind me of arbutus trees on Vancouver island

I know it is really weak... but I am leaving Canada for the summer in 6 days and have little time to search around for suitable frames. So I came up with this treatment of IKEA cheapest frames and miniature so it doesn't break the bank.... and I have shiboried them and the colour is from KMnO4 so at least it is in keeping with what I am doing. I will bear it in mind. though - good suggestion.
Many of my fellow participants like the edges, so I might try to do one piece (probably with a collage of several pieces) that is floating in a deep frame and we can enjoy the undulating surface and the edges.... to be continued...