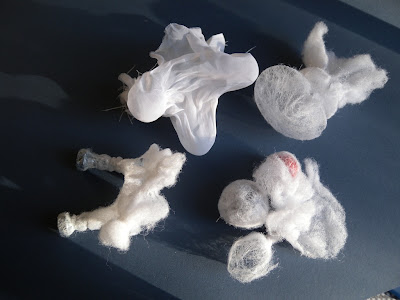 Images above are from trials with half strength Paverpol... soaked into the fabric.
Even this weak solution dried too hard where the fabric is gathered thickly.. and it was impossible to remove the mould from the 'neck' of the shape. Where it was possible to take the mould out from the top 'blob' shape, the thin fabric was not hardened at all... Top right and bottom right.
Removal of some of the (synthetic) threads from the 'neck' was also impossible. And If I removed the threads before the Paverpol had set, fixing of the shape was compromised, particularly the otherwise tight 'neck'- although this could be good for a different use... see the cloud shapes top left.
I forgot to wrap the screws in plastic and they were impossible to remove.
But the main problem is that the Paverpol seems to bond the matted fibres where wrapping is tight thus preventing removal of the object being used as a mould. 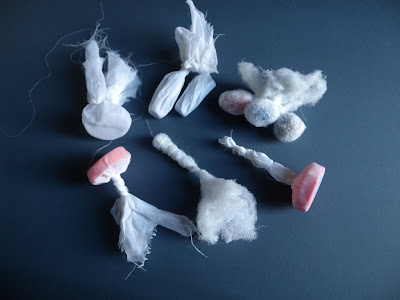 When full strength Paverpol is used the result is even worse for the pieces that are actually enclosed in the fabric, 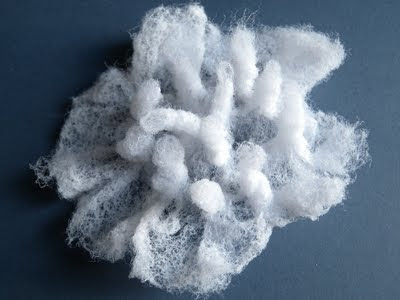 Where the mould is removed after the shape is wrapped.... the spikes and ground are hardened and the thread can be removed albeit with effort (particularly around the tips which tend to rip away).
Advice about warming the fabric and thread up to aid manipulation after hardening does work slightly, but the problem is that the Parverpol has bonded and matted the fabrics so well that even warming has little effect - with the added complication that these are meltable materials.
Did I miss the window of opportunity?
Next spraying onto previously steamed shapes....
at 8:20 AM