Tie Quilting - Quilting with Ties, not Thai people who quilt

Vally gave me a lift over to the Presbyterian Church on Memorial where a large group of the Quilt Guild of Great Houston, gathered to socialize and hear a talk on Quilting with ties.

I had a lovely welcome as Ginelle Long who had had a Canadian two dollar note in her bag for years (since her trip from Boston via Nova Scotia to Montreal in the fall of days gone by,  decided to give it to me.  Here it is.  I don't know if it is illegal to photograph money please tell me if it is -save me from going to the penitentiary.  As you know we have the toonie now and no two dollar bills. 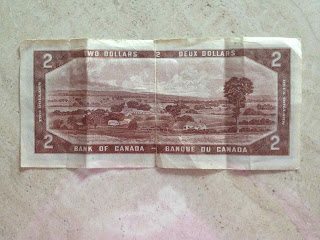 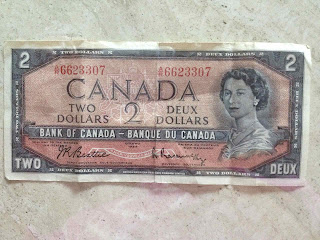 Now, back to the quilting meeting. 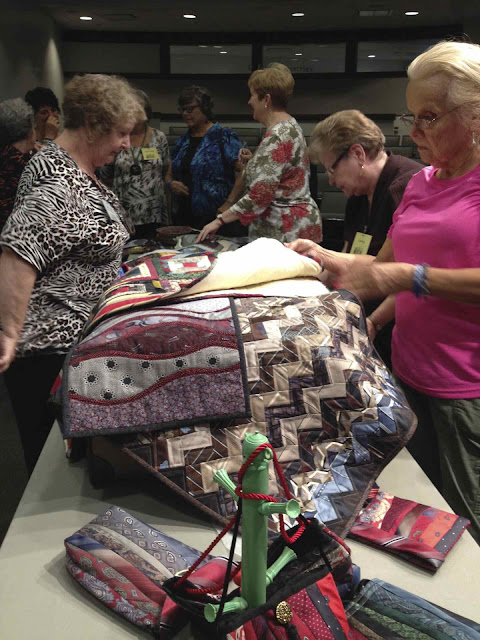 I picked up some valuable information - like:-
I can travel for half price on the Metro. bus etc.
The quilting group made 500 quilts this year and have donate most of them to charities around Houston, the rest will be given in the near future... that is a wow achievement to my mind, though I suspect many other guilds and groups are doing similar good voluntary work. 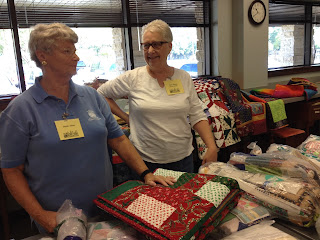 Some of the 500 Charity Quilts - That is Janet Becker on the right, she is a big organizer of this work.

Now back to the lecture.
Betty Rivers has been quilting with ties for 20 years+ and has become masterful at getting guys to give her their old ties.  She has done a lot of work and I admire her for showing her work when so much of quilting is about the precision which she doesn't worry about too much.  She hoped that folks who do work with precision will learn something from the advances she has made whist not taking all that time worrying about points and so on.  Good for her.  And she got a round of applause for saying so.

She is a great spirit and very funny.  Here are some of her one liners.
"I just got so clever, I am so scared of myself"
Nine tin tie men (the title of one of her pieces)
Ties who play nice together"
"If they're from Him enjoy them "(Interpretation: Him being your husband not The Maker)
a saying she had heard long ago "An untied man is an untidy man"

I enjoyed being with this group and respect them immensely, their president is very skilled in her position, no wonder they want her to serve for a further year.  She had us doing hand exercises at 'half time' and gave a heartfelt warning to us all to exercise and look after ourselves.

And for those of you who remember Andee from Calgary days here she is... how did she stay so young? I want my hair that colour.  It is almost edible. Nice pairing with the T. 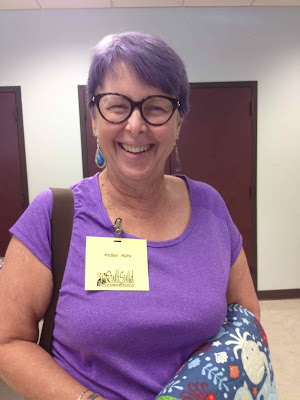 You're safe Karin as money can be photocopied for educational, commercial & artistic purposes. Sounds like a wonderful group. Liked the one liners too :)

Thanks, I went to Bastrop yesterday and found myself outside the old jail! The birds in the trees appeared to be throwing pecan nuts at my head, I felt guilty. Now I will relax about it.