I'm a proponent of cultural appropriation in art - How politically incorrect is that? 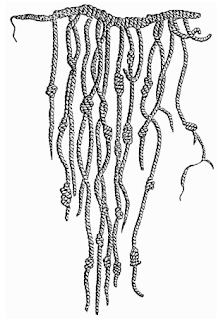 I'm thinking of using knotting in a piece of work, researching Quipu and thinking about the political correctness of avoiding cultural appropriation in art. Cultural appropriation is a thorny issue, one I have been made keenly aware of in Canada. I hold in my heart regret for those whose culture has been appropriated whilst under colonial rule, or subjected to an imbalance of power.  This is not what I am involved in here.

Quipu are best known from the now lost civilization of S. America, but also from China and Hawaii... and thought to be a method of recording data, stories and double-entry accountancy.  Who would have thought that when researching for a mixed media/fibre art work I would need to read from The Accounting Historians' Journal?

Is cultural appropriation a bad thing?
Though the word appropriation has negative connotations, I argue that cultural appropriation can be a work for good.
Where would we be, I wonder, if no-one had picked up the idea of making marks on a cave wall and run with it?... Hmmm? (The latter remark to be said with a James Keziah Delaney intonation), to lighten the mood a little).
This, below, from Wikipedia (of course) says the same thing, a view expressing when cultural appropriation might be seen as a positive activity...

"A different view of cultural appropriation characterizes critics of the practice as "engaged in a deeply conservative project: one which first seeks to preserve in formaldehyde the content of an established culture and second tries to prevent others from interacting with that culture"   Proponents of cultural appropriation view it as often benign or mutually beneficial, citing mutation, product diversity, technological diffusion and cultural empathy as among its benefits."

I would add the word  progress to this list.
I can imagine a world where Quipu continues to be created in its original form as a tribute to the now, lost civilizations that practiced it in South America and others eg., China and Hawaii.  Alongside this I would advocate its progress and development in the same way I work with Trapunto (Italian), Shibori (Japanese) and Shisha (India) and other techniques that are traditionally associated with a specific culture (see names in parentheses), where I have studies the traditional form, and then moved it to a new and innovative use.