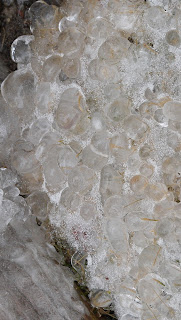 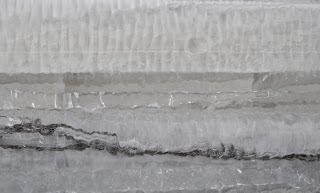 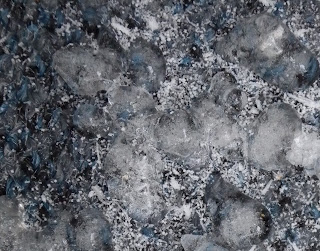 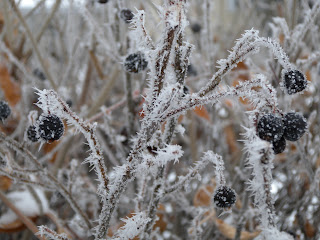 For those of you who like something to read...


You might like to picture this - Spring officially started this week in Canada.  We had snow!  Not to worry, I love the snow it is beautiful and apparently so pure.  We all enjoy the miraculous shapes that the snow and ice make and continue to enjoy being out and about in the snowy and wintery weather.  But being the end of the season, the air has become a little damper and certainly warmer.  The result is that the character of the snow changes and we even had freezing rain yesterday morning.
This morning I awoke and, as normal, took a look out of the front window to see if there was snow (as I need to clear the drive and public pathways if there is, I like to check early in the day, so that I can get out there before driving my daughter to school).  There was a light dusting of white on the ground which had been cleared yesterday. But the trees appeared a little light against the sky.  It looked different.
As the sky lightened the wonderful white tree shapes came out of the gloom and beyond it, so that by the time I had driven back from school drop-off, the trees stood out, bright white, against the off-white sky, in a reversal of the norm.  A negative image had developed that is, ironically, impossible to capture on film.
What we have today is a magnificent haw frost... the length of some of the crystals that have grown with the gentle wind is amazing - far longer than my photos show (I didn't have a camera with me at school).  They stand like white magnetic hairs on the heads of all fence posts and form Mohican hair styles extending downwind of all the fence posts.  Similarly they top and line the branches of the trees and hedges.
I am reminded that it is a wonderful world, for all the difficulties the natural world can throw at us as well as those that, sadly, man creates across its surface. 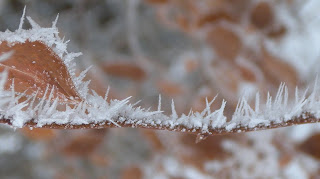